This week Russia was named as the state agent responsible for the attempted assassination attempt on Sergei Skripal, 66, and his daughter, Yulia Skripal, 33 in Salisbury.

But, this is not the first time that Putin has made incursions into the affairs of other states, and I was reminded of some photos that I took at the Saint Volodymyr statue in Holland Park following the Russian annexation of the Crimea. 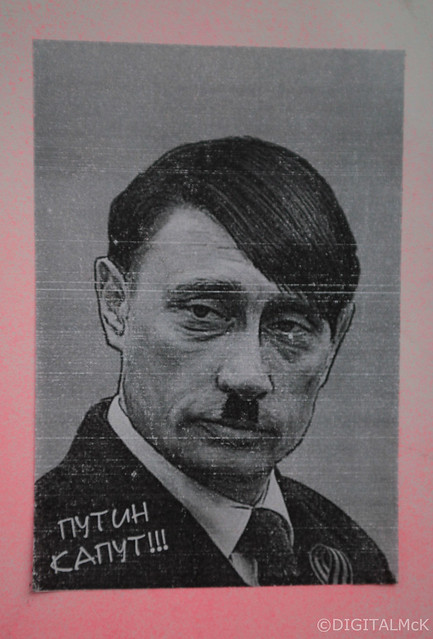 This self made poster compares Putin to Hitler. Its a bit rough and ready and the picture represents probably the most incendiary insult that you can make to a Russian. It would be the equivalent of calling Mrs May a pedophile. The hand written text says “Putin Kaput” in Cyrillic, which echos the graffiti that Soviet Soldiers  scribbled on the Reichstag when they invaded Berlin.

The link, according to the poster is clear: Putin is the modern Hitler. 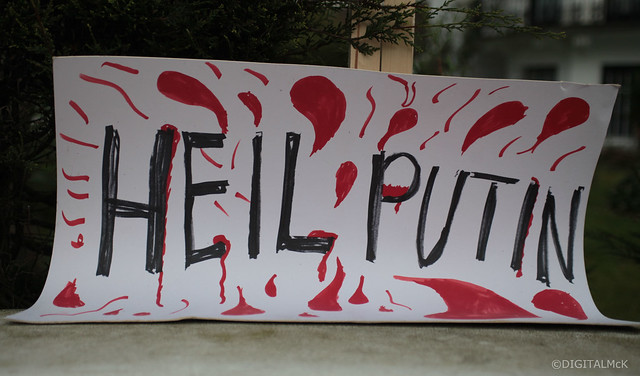 This poster, in English, makes the same point, Putin is a fascist akin to Hitler.

It also links to another point, single posters don’t change the world unless the powers that be decide to resist, affect or remove the problem. 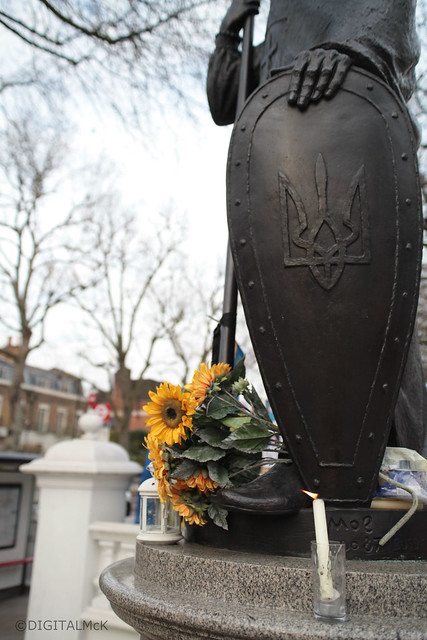 The posters were made in 2014 and now in 2018 Putin has just got stronger and bolder – sound like anyone else we know from the last 100 years? They were placed around the statue of Saint Volodymyr, who was the saint who brought Christianity to Russia when he arrived in Kiev, now in the Ukraine and baptised people in the rive Denipr.

The statue was raised in 1988 to celebrate 1,000 years since Saint Volodymyr’s Christianisation of Rus. In 1988 I was in the Soviet Union, in Kiev, it was a time of hope and freedom where the USSR was liberalising and opening itself up to democracy.

The posters from 4 years ago, seem to show that in the 30 years since the statue was raised, Russia has gone from dictatorship to chaos to wobbley democracy to dictatorship by oligarchy.  Putin has been compared to Hitler and seems to following the same path – where will his ambitions end and what will we have been through in another 30 years?