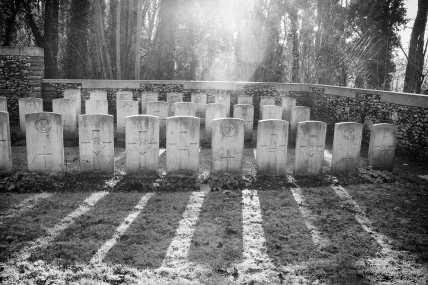 I have just been in France where I was privileged to visit a number of WW1 British and Commonwealth War cemeteries with a friend who was visiting the grave of their Great Uncle who was killed at the age of 19 just before the battle of the Somme, when a wall fell on him.

This afforded me the opportunity to try and take photos in what is, I suppose, the closest British people can get to “Holy Ground”.  I don’t have any ancestors buried in any War Cemetery but there were other family connections with the First World War.

The first cemetery we visited was at Roeux, where I came across the grave of 266066 Private A. Gordon, of the Gordon Highlanders. This regiment was raised in Huntly, Aberdeenshire which is where one side of my family comes from. Private Gordon, could well have gone to school with my Father’s Uncle or known my Grandfather’s shop in the town.

In Huntly a young man is known as a “Loon” and this is one Huntly Loon who never went home. More poignant yet was the grave of another Gordon Highlander who was one of the many graves where they were simply labelled “Known Unto God”.

This man is unrecognised, unknown but not forgotten. It is true that:

“At the going down of the sun we will remember them”